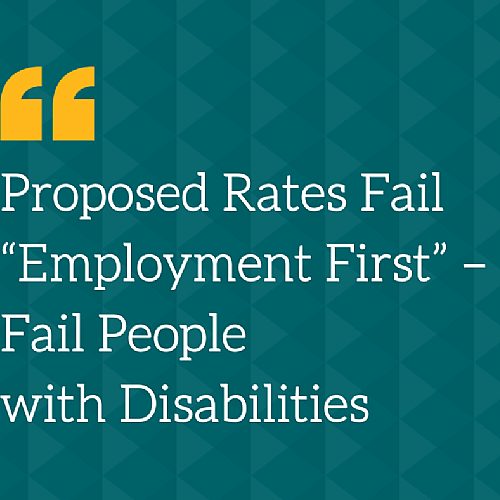 In late December, the Pennsylvania Office of Developmental Programs (ODP) proposed new rates for all of its community-based services. The last permanent rate increase was 2½ years ago, and with the extraordinary wage inflation occurring in the economy and business expenses growing exponentially (e.g., gasoline prices, health care benefits, etc.), organizations like Achieva were happy to hear that rates paid by our state government were finally going to be raised. That is, until more was learned about the ODP proposal.

In a macro-sense, the ODP proposal simply provides too little funding to keep up with the cost of providing services. Numerous editorials from respected news outlets across the state have agreed, arguing that the ability of disability service providers to attract and retain quality direct support professionals has become too challenging when private-sector businesses can simply raise the prices of goods and services to pay their employees (whom disability providers are competing for) higher wages. When it comes to the publicly-funded disability service system, the charitable non-profits providing the services can’t simply raise their prices to offer higher wages. Organizations like Achieva are dependent on the state’s fee schedule, which is controlled by the state’s executive branch of government and funded by the legislative branch. Disability advocates and provider associations alike have made a compelling argument that ODP’s recent rate proposal falls short by about $136 million (in total state and federal funds).

From a micro-perspective, the state’s recent rate proposal is even more of a head scratcher. You see, rate increases were not proposed evenly across the board. Rather, ODP increased rates for some services far more than others. They say there were good reasons to do so, but the process ODP used is not transparent, and so providers, advocates, and provider association representatives have been left in the dark about why certain services received far less of a rate increase than others. Take for instance the services under “Supported Employment.” Supported Employment services help people with disabilities get and keep good jobs in the community – jobs that pay competitive wages and enable people with disabilities to experience the dignity of work, save money for things they need, and even pay taxes.

Indeed, 3 years ago, the employment of people with disabilities was so important that the Governor and General Assembly passed and signed Act 36 of 2018 into law. Act 36 established “Employment First” as the official policy of the Commonwealth, which requires “competitive-integrated employment be the first consideration and preferred outcome” of publicly-funded programs, such as public education and long-term care programs. Section 4.d.1. of the Act went so far as to say, “Financial incentives, when allowable under Federal funding rules for employment services, shall be granted to providers who support the placement and continued employment of individuals with a disability in competitive-integrated employment.”

So how does Supported Employment fare under ODP’s recent rate proposal? Here’s how: This is very frustrating. Again, rates haven’t increased for 2½ years, and the state regulations don’t require ODP to even look at these rates again for another 3 years. So employment service providers like Achieva are looking at a less-than-one-percent rate increase to get them through a possible 5-plus-year stretch of time. The ODP rate proposal for Supported Employment fails on its face to align with Pennsylvania’s “Employment First” statute, fails to incentivize competitive-integrated employment over segregated, subminimum wage employment, fails to help existing disability employment providers continue to provide such services, and fails to encourage new organizations to get into the business of providing employment services for people with disabilities. The ODP rate proposal fails people with disabilities.